skip to main | skip to sidebar

I have recently started a new comic 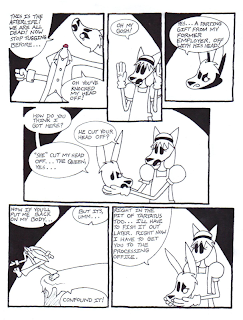 Just recently I started a new comic called The Raven & The Writing Desk. I had originally planned it to just be a side story in The Black Marker Detective, but as I developed the story more and more I decided that it should really be it's own comic.

The idea was to do my own take on Alice in Wonderland, which happens to be one of my favorite books. I know there have been many, many different comics showing someone else's take on that story, but I wanted to do it anyways. I can assure you there has never been one "quite" like what I have planned.

This comic, which is furry, being set in the same world as my core three, (Black Marker Detective, Confessions Of A Teenage Carnivore, Fox Chicks) depicts Alice as a delusional young cheshire cat who dies and gets caught up in the politics of the underworld. Depicting Wonderland as the afterlife has been done before in a comic I will not mention due to the nature of it's content, but as far as I am aware never in a comic that can be enjoyed by everyone.

You can expect to see most of the characters from Alice In Wonderland and Through The Looking Glass popping up in different incarnations throughout my comic as well as a few passing nods to other people's incarnations of the characters. So a little knowledge of Alice and her many adventures will come in handy, but isn't necessarily needed.

One other thing I'm doing with this comic that I personally have never done before is that the comic is being told in two different formats. The parts with Alice are hand drawn in my normal style, but I am also switching back and fourth between that and the story of the author who is writing the comic (a fictional version of myself). The parts about the author are shown as a photo comic to differentiate between the real world and the world of the comic. Although I'll let you in on a little secret... Eventually the those two worlds won't be quite so easy to tell apart.

For the photo comic parts I am in fact playing the fictional version of myself, and finding that a photo comic is not as easy as it sounds. Not only was there the hassle of changing my appearance for the character, but also of making sets. If the character is a slob I can't very well show him in a clean room, can I? And making a truly messy set to take the photos in is a lot harder then you think. Thank god I have a basement...
Posted by Shaddy Lovencraft at 11:33 AM

Shaddy Lovencraft
Tennessee, United States
I am a Tennessee born writer who couldn't spell his way out of a paper bag and cartoonist with no real art skills to speak of. Yet for some reason people still read my stuff. I can't understand it... (At the moment I am involved in a relationship with an AI program)